The Company’s Cobar Project is located approximately 470km west of Sydney in New South Wales. It consists of three tenements, EL 6321 Browns Reef, which is one of the Company’s two flagship assets, and two other exploration licences, ELs 9180 Tara and 9136 Bothrooney.

EL 6321 is 5km west of the town of Lake Cargelligo, EL 9180 lies about 80km north of Lake Cargelligo and 120km south of Cobar, while EL 9136 is immediately east of EL 6321 and extends to the north and south of it. All three tenements lie in the Rast Trough of the Cobar Basin. 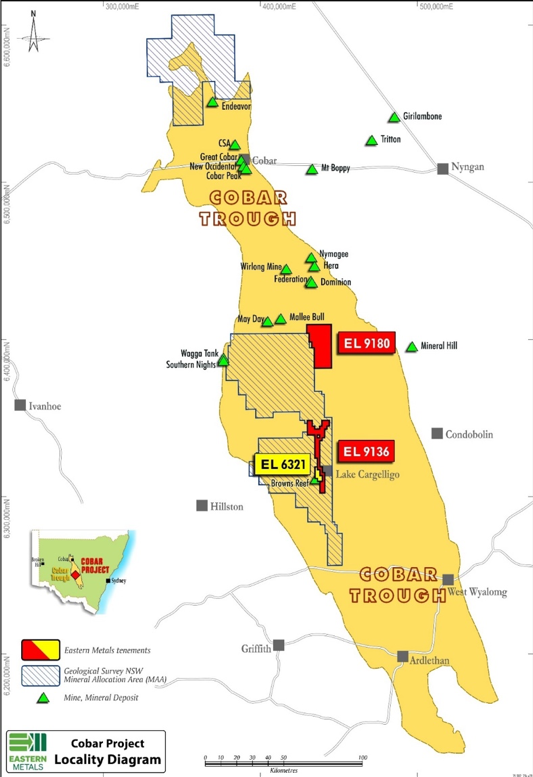 Browns Reef is a polymetallic deposit developed in the Preston Formation, a sedimentary sequence of Devonian age. It is close to the Woorara Fault, a regional-scale structure that may have formed a pathway for mineralising fluids. Browns Reef is a strata-bound or stratiform deposit that was discovered in the late 19th century with shallow shafts sunk in the 1930s and was worked briefly for gold. The lode trends north north-west where the Preston Formations consists of steeply dipping volcanic sandstones, siltstones and black shales. The lode contains pyrite, sphalerite and galena, along with minor gold and chalcopyrite mineralisation. Modern exploration commenced in the 1970s when six diamond holes were drilled. Since then, several drilling programs have been completed by various tenement holders. Lead isotope data suggests Browns Reef could be similar to the New Cobar and CSA base and precious metal systems at Cobar.

Outcrop of the prospective Preston Formation in the Browns Reef tenement is poor. Most of the bedrock is covered by Quaternary colluvium, alluvial and minor aeolian material. Elsewhere within the tenement Tertiary basalts also obscure the basement rocks.

The known deposit at Browns Reef occupies a small part of the tenement. Most of the deeper drilling to date has been confined to a zone about 2.7km long in the central to southern part of the tenement where the Preston Formation dips steeply to the west.

A 2015 Exploration Target, based on 52 diamond drill holes and 22 RC holes, was estimated at 27 to 37 million tonnes averaging between 1.3-1.4% zinc, 0.6- 0.7% lead, 9-10g/t silver and 0.2-0.3% copper. The potential quantity and grade of this Exploration Target are conceptual in nature and there has been insufficient exploration to define a Mineral Resource. It is uncertain if further exploration will result in the determination of a Mineral Resource. Eastern Metals confirms that it is not in possession of any new information or data that materially impacts on the reliability of this estimate.

Eastern Metals’ initial exploration strategy is to follow up on previous drill holes where ore grade and width intercepts were defined in previous drilling. The objective is to identify high-grade zones within the extensive mineralised system that may be minable.

The Company completed the initial drilling program at Browns Reef in March 2022 with mineralisation intersected in all four holes extending the lode along strike and at depth. The program was highlighted by the potential discovery of a significant high grade zinc zone – called the Evergreen Zone – with elevated levels of Pb, Cu, Ag and Au. 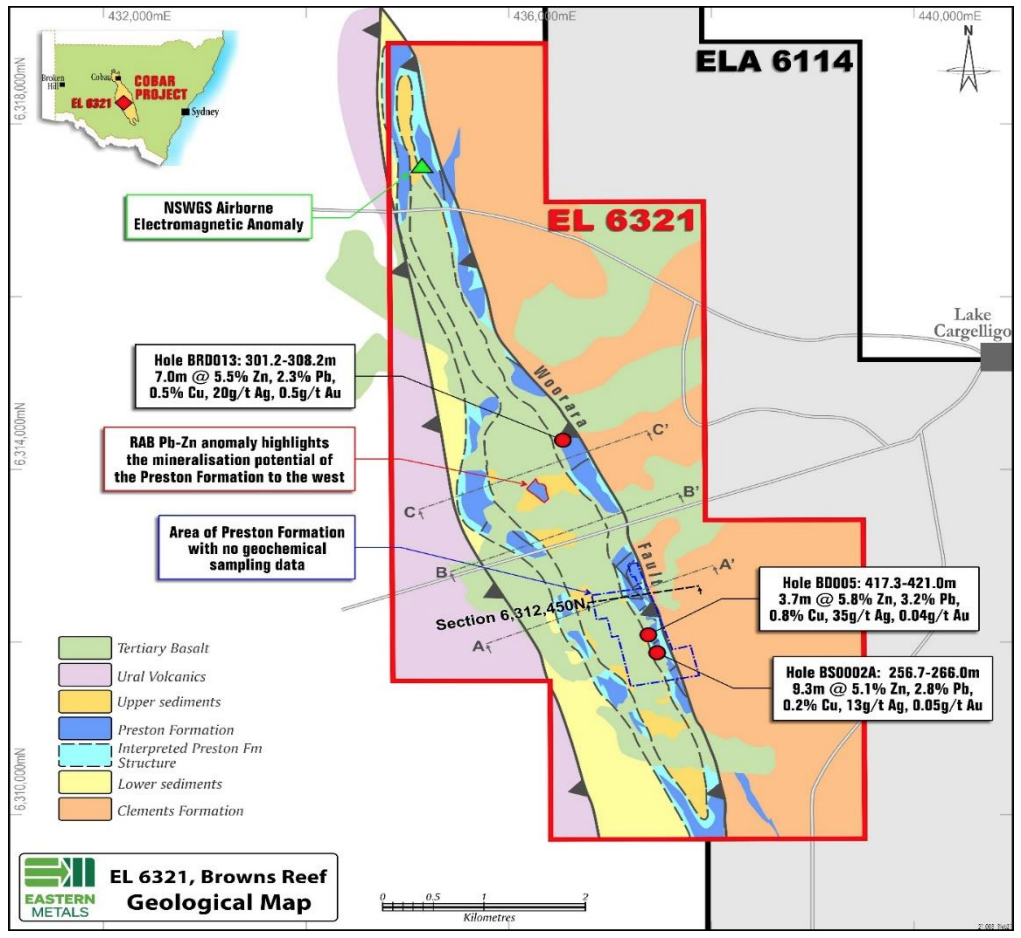 Interpreted Browns Reef structure with the location of the previous high grade broad
intersections which are the initial focus of Eastern Metals’ exploration. 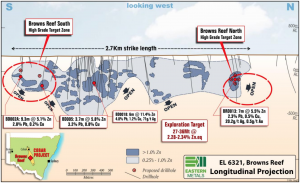 The Tara tenement covers an area of 376km2 and is located 120km south of Cobar. The basement geology comprises mostly Silurian Erimeran Granite apart from the southeast corner where Ordovician slates of the Tallebung Group outcrop. Some inliers of these sediments are also present within the granite batholith.

Several companies have previously held exploration titles over parts of EL 9180. Electrical geophysical anomalies associated with narrow lenses of gossanous slate were tested with two diamond drill holes totaling 551 metres at the Tara prospect. Both holes intersected graphitic sediments containing disseminated pyrite but with no associated base metal mineralisation. Other ground exploration has mostly been limited to reconnaissance surveys with no notable success.

EL 9180 is situated immediately east of the northern end of the NSW Geological Survey North Cobar MMA area. Minor biogeochemical and hydrogeochemical (water bore) sampling has been conducted across the tenement as part of the government’s MinEx CRC program designed to stimulate mineral exploration in NSW.

The surface geology of the tenement comprises mostly Quaternary and Tertiary sediments deposited on the flood plains of the Lachlan River and its tributary Booberoi Creek. Small areas of crystalline Ural Volcanics outcrop in the north and south. Tertiary basalt flows cross both EL 6321 and EL 9136 in the region near the township of Lake Cargelligo.

There are no significant mineral deposits known within the tenement. Past exploration programs have been conducted by several companies and work conducted includes airborne magnetic surveys to define targets for follow up investigation. None of the anomalies located within the tenement yielded significant results from ground surveys that in some cases included minor RAB drilling.