The basement rocks in the project area form part of the Thomson Orogen, but these rocks are covered by younger sediments of the Eromanga Basin and do not outcrop within the tenements. Targets in the basement beneath the cover rocks are the focus of the Company’s exploration activities.

The Thomson Orogen is one of the most poorly understood major orogenic belts in Australia. It covers a vast area of south-central Queensland but extends into northwestern New South Wales, where the Company’s tenements are located. The southern part of the Thomson orogen is a major east-west oriented structure that runs broadly parallel to the Queensland-New South Wales border. Aeromagnetic data can be used to map structures in the basement, as well as to identify key anomalies that may be associated with mineralisation.

Basement rocks in the Thomson Orogen rocks have long been acknowledged as potential hosts to mineralisation, but the depth of cover and the lack of quality past exploration data had held back private sector activities until a cooperative program between the Geological Surveys of Queensland and New South Wales and Geoscience Australia that commenced in 2005 led to a better understanding of the regional potential. High quality aeromagnetic data became available from this program, and this led to drill testing of some of the anomalies by a small number of companies. Interpretations of lithologies intersected in this drilling suggest that the basement rocks in the area of the Company’s tenements are equivalent to those of the Cobar Basin, and therefore potentially prospective for the discovery of similar styles of mineralisation. 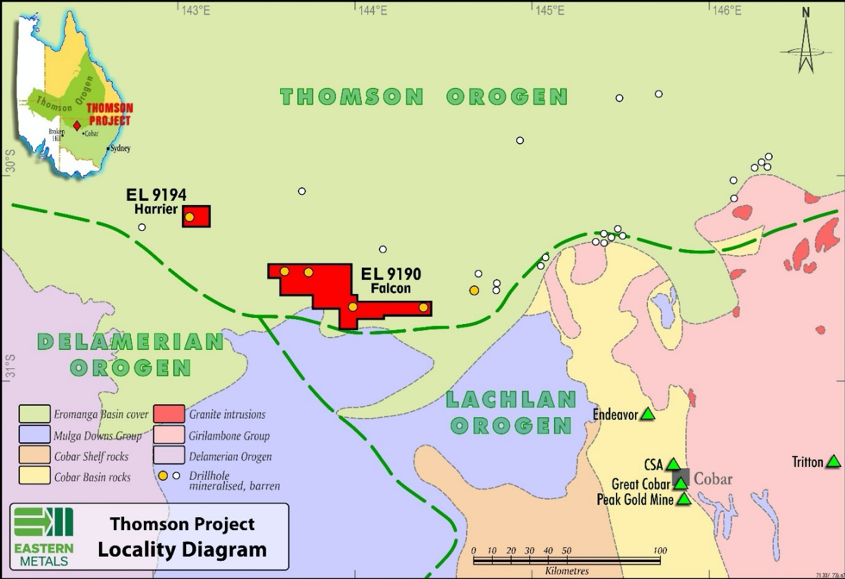 Location of the Thomson Project.

Eastern Metals’ exploration targets within the Thomson Project tenements are copper-gold and lead-zinc-silver deposits similar to the Great Cobar and CSA copper-gold mines, and the Endeavor lead zinc mine. These types of deposits are generally steeply dipping, or pipe-like, with little surface geological or geochemical expression. However, the ore systems typically contain magnetic material, mainly the iron-sulphide mineral pyrrhotite, and can be identified using ground or airborne magnetic surveys. The magnetic anomalies associated with the Cobar deposits are generally very localised, discrete “bullseye” type anomalies.

Previous companies have attempted to drill test some of these anomalies. In most cases, this drilling has been too shallow, or the holes have deviated off target and failed to satisfactorily test the source of the anomalies. In many cases, modelling suggests that insufficient magnetic material has been intersected to account for the magnetic anomalies. However, many holes drilled on these anomalies intersected spotty, anomalous base and precious metal values and alteration indicative of possible proximity to significant mineral systems within Cobar Basin-style rocks.

Very high-quality aeromagnetic data is now available for this area. Using this data, and the results of previous drilling, Eastern Metals has selected a set of “bullseye” magnetic anomalies that show similar characteristics to those associated with Cobar mineral deposits. Careful geophysical modelling of these anomalies can be used to derive targets for drilling designed to intersect the main causative magnetic bodies for each anomaly.